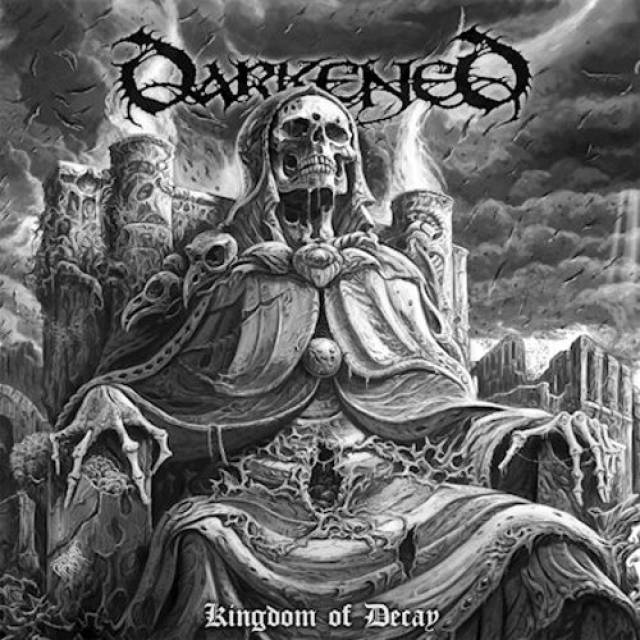 Debut album "Kingdom Of Decay" out on September 11th!

It was but the summer of 2019 when DARKENED burst onto the international stage with their debut EP for EDGED CIRCLE, Into the Blackness. Although an otherwise-brand-new entity at the time, DARKENED boasted a wealth of experience in the death metal underground, comprising drummer Andy Whale (ex-Bolt Thrower / Memoriam), bassist Daryl Kahan (ex-Disma / Funebrarum), vocalist Gord Olson (Ye Goat-Herd Gods / Demisery), and guitarists Linus Nirbrant (A Canorous Quintet / This Ending) and Hempa Brynolfsson (Excruciate / Ordo Inferus). As such, the band's opening salvo was truly a sum of all its not-inconsiderable parts: all-caps DEATH METAL of a cool and cruising and above all CRUSHING aspect. Unsurprisingly, Into the Blackness garnered widespread acclaim, and heightened anticipation for the band's inevitable first full-length.
At last, it arrives under the ominous title Kingdom of Decay. DARKENED here have undergone a slight lineup shift, with Kahan departing as bassist and Tobias Cristiansson (Grave / ex-Dismember) taking his place - another underground veteran whose presence is perfect for the band's increasingly confident crush. Everything on Kingdom of Decay is an intensification of that short-but-sweet debut EP: the riffs more patient but punishing, the doom darker and doled out more effectively, the songs more world-eating whilst effectively exploring a greater wealth of dynamics and, it must be said, atmosphere. Elsewhere, the winning formula of Into the Blackness remains largely unchanged - the stately, steely pulse of later Bolt Thrower or the subsequent Memoriam dusted with the classy melodicism of A Canorous Quintet and successors This Ending, but all done with a touch that's somewhere between comfortably familiar and subtly unique - and you can now also add a touch of the tank-like onslaught of prime Grave, with everything given a gleaming CRUSH courtesy of the mixing by Tobbe Sillman (General Surgery) and mastered by the one and only Dan Swanö (Edge of Sanity) in the famous Unisound Studio in Sweden. This is what debut-album dreams are made of...or nightmares!
Graced with unforgettably austere cover artwork courtesy of Juanjo Castellano Rosado (Unleashed, The Black Dalhia Murder, Gates of Ishtar), DARKENED's Kingdom of Decay is guaranteed to be one of THE death metal albums of the year. DEATH METAL for death metal maniacs, by death metal maniacs! 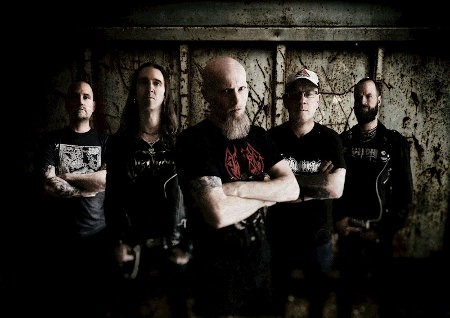